An icon of St. Joseph will be the centerpiece of a devotional display in the Mary Chapel of St John Neumann Parish, Reston, VA, from Monday, September 19 through Sunday, September 26, 2022. The icon will also be displayed during the Catholic Education Knight (CEK) on September 29 in the Brown-McCarthy Auditorium at 7:00pm.

Flowing from the Year of St. Joseph declared by Pope Francis in 2021 and inspired by his apostolic letter “Patris Corde,” the Family of Man Council 7566 of the Knights of Columbus is sponsoring the display of the icon. They are sponsoring the icon to honor St. Joseph and pray for his intercession in preserving, cultivating, and passing on the Catholic faith to future generations.

Supreme Knight Patrick Kelly chose to entrust his service as Supreme Knight to St. Joseph and, through this Pilgrim Icon Program, encourages Knights and their communities to “turn in prayer to St. Joseph, give thanks to God for the gift of fatherly example, and ask St. Joseph to be a father to us” as we seek to “grow in our imitation of St. Joseph’s quiet strength, integrity, and fidelity.”

In the first year of his pontificate, Pope Francis received the Order’s Board of Directors in a private audience, telling them: “I commend all of you in a special way to the intercession of St. Joseph, the protector of the Holy Family of Nazareth, who is an admirable model of those manly virtues of quiet strength, integrity, and fidelity which the Knights of Columbus are committed to preserving, cultivating and passing on to future generations of Catholic men.”

The St. Joseph icon is the latest icon to be a part of the Knights of Columbus Pilgrim Icon Program. Every few years, the Knights of Columbus selects an icon of a saint whose patronage inspires the Knights and their communities to feature in the program. The icons travel from council to council and serve as the centerpieces for prayer services in parishes throughout the Order.

All community members are encouraged to join the Knights of Columbus to pray for the intercession of St. Joseph in raising, guarding, and preparing future generations. 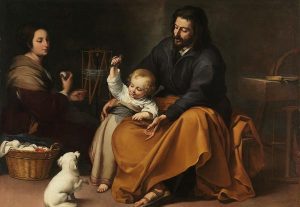