As the number of families and Catholics in Reston and the surrounding area increased dramatically in the late 1970’s, Bishop Thomas J. Welsh realized the need for a second Catholic parish in Reston.

On July 5, 1979, Bishop Welsh created the parish of St. John Neumann. The parish was named after St. John Neumann, who was a member of the Redemptorist Order and the fourth bishop of Philadelphia (1852-1860). He was a saintly priest and he was canonized on June 19, 1977.

St. John Neumann was founded to serve the people of South Reston, parts of Herndon, Vienna, and Fairfax, under the ministry of the Oblates of St. Francis de Sales.

On June 28, 1982, the 550 seat church was dedicated. It is located on the 18 acres of parish property off of Lawyers Road. Within three years plans were made to expand the parish facilities. The parish center and rectory were built in 1990-1991. In 22 years, the parish has grown from 800 families to over 3,600 families and continues to add 100 families a year. In addition, over 1,700 children participate in the Religious Education program each year.

The Oblates of St. Francis de Sales decision to come to St. John Neumann means the order made a commitment to staff the parish with its own Oblate priests.

In keeping with the spirit of Vatican II, major roles in the administration of St. John Neumann are shared with members of the laity. Laypersons serve in full-time positions such as Administrative Assistant, Director of Music, Pastoral Associate, Director of Religious Education, and Youth Minister. The Staff, Finance Committee, and the Pastoral Council advise the Pastor in major areas of policy and planning.


Growth in the Reston area continued at an amazing rate, and soon attendance exceeded the 550-seat worship area. In 1996 it was decided that a new and larger worship space, classrooms, and offices were needed. The official request to the Diocese of Arlington was made on October 1, 1996, and design development began in earnest in April 1997. A series of setbacks in 1998 challenged the parish’s ability to stay on course. Following negotiations with Fairfax County a new design was begun in the spring of 1999 and we were finally on our way!

The current design was approved by the county in December 1999. In the summer of 2002, the contract was awarded to Coakley and Williams Construction. The groundbreaking ceremony took place on October 6, 2002, with Father Brown officiating. Construction equipment became a mainstay, chain link fencing went up, and construction was underway at last. Father Brown, Oblate priests, the staff, and parishioners watched the project move forward despite record-breaking rainfall, snow, mud, and the ever-present Murphy’s Law! 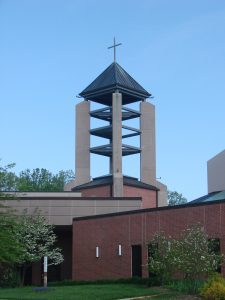 Parishioners were able to sign one of the steel I-beams before it was erected in the entrance cover to the west of the church offices. The bell tower was erected on June 5, 2003. The three bells which were eventually to be computer controlled, ring in the notes of G, B, and D.Collectively they weigh 2,500 pounds and were installed and rung in early 2004. The building took shape as the steel framework rose from the ground in the spring of 2003.

On May 23, 2004, the community gathered to celebrate the Dedication of the new worship space, with Bishop Paul Loverde presiding. Throughout the rite, we were reminded – in the words, gestures, and symbols – that the people of God are the Church that is being dedicated. We continue to take seriously the fact that we too are a house of God, built of living stones – a house not yet completed whose construction will continue on in time so that it might be dedicated at the end of time. As we take in the splendor of the work completed in brick and stone, glass and tile – we are called to find its spiritual counterpart in our hearts – and let our lives reveal the handiwork of God’s grace. May God who has begun this good work in us bring it to completion in Jesus Christ by the action of the Holy Spirit.